The Clay County Historical Society is a 501(c)(3) Non-Profit Educational Organization that was founded in 1966 by a group of local people interested in preserving the history of Clay County.  Through their efforts, an interesting and still growing collection of artifacts and documents has been assembled.

The Clay County Historical Society collects, preserves, and promotes the history of Clay County, Florida.  Our collections are donated, loaned, or purchased and held in trust for the use and education of the public.  They are primarily composed of exhibits, photographs, maps, legal documents, and memorabilia of days gone by.

Depending on who you ask, there are many answers, but you have landed here and we believe, more than anything else, its history is what makes Clay County special.

The Indian arrowheads, battlefield remnants from the Civil War, turpentine tools, catfaces on the longleaf pine trees, script, Prohibition stills, and old railroad tracks throughout the county speak of hardy pioneer people who struggled and people who flourished.

Clay County, Florida was named for Henry Clay and carved out of Duval County, South of McGirt’s Creek to the Bellamy Road and West of the St. Johns River to the Columbia County line in 1858. Not a Floridian, Henry Clay represented Kentucky both in the Senate and in the US House of Representatives and was known as the “great compromiser”. He was a guiding force in American political life in the early 1800s, promoting the “American System”, his plan to support domestic industry and agriculture (and reduce dependence on imports) through improved transportation routes, protective tariffs, and a national bank.

Historically, Clay County has been a rural, agricultural, bedroom community for Jacksonville. About eight areas of the county are more densely populated. Some are unincorporated like Middleburg, Lake Asbury, Lakeside, and Fleming Island.  Others are incorporated towns; Green Cove Springs, Orange Park, Keystone Heights, and Penney Farms.

Except for Green Cove Springs, the county seat, with a history dating back to 1866, and Orange Park, incorporated in 1879, the development of the incorporated areas occurred with the Florida Land Boom of the 1920s when it was believed that transplants from the North and West could grow oranges, pecans and produce to export. For example, Keystone Heights, named for the Keystone State, was developed in 1924 by Pennsylvanian, John Lawrence who promoted it as a place to live, play and invest.  Shortly thereafter, Penney Farms, established in 1926, was created from Long Branch City and named for its benefactor J. C. Penney who marketed thriving homesteads to farmers as far away as Nebraska.

In many cases, the history is deeply rooted in the geographical attributes of Clay County. The navigable St. Johns River, a National Heritage River, is a vital artery that has provided transportation to the ocean for Indians, pirates, military, agriculture, timber, and tourists for centuries. The river as well as beautiful lakes, tributaries, and springs along the way also contributed to flourishing settlements and much tourism.

The early tourists, enamored with the mild winter climate, cute baby alligators, drifting Spanish moss, and gracious hospitality of the South, contributed generously to the economy of Clay County. Often they stayed and built churches, homes, and businesses. 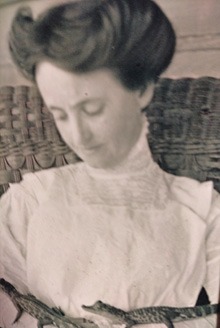 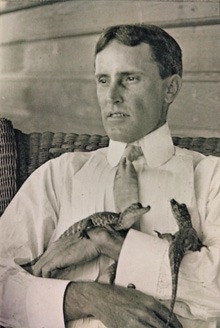 Others came less voluntarily with the build-up of the Army prior to WWII at Camp Blanding and  Navy at Lee Field Naval Air Training Station in Green Cove Springs.  German prisoners of war housed at Camp Blanding and sailors stationed in Green Cove Springs for the post-war engagement of the “Mothball Fleet” added to the mix.  Some sailors met local girls and came back to make them brides and settle in Clay County.

At the museum, we refer to the three eras of Clay County History: The Early Years, The Hotel Era, and the Military Era.  Whatever the next era is, it will likely be a product of our cherished history and that is what makes Clay County special!

The current museum was opened in the 1890 Courthouse Annex in 1975. It contains many exhibits depicting the everyday way of life in Clay County during the past century.  There is a Country Store, an early kitchen, a bank vault, a real printing press, and many other unique items of historical interest.

The Railroad Collection was added in 1992. It was assembled by Bud Hess during his lifetime, purchased from his widow, and brought across the river to Green Cove Springs.  It includes a caboose, train station, (originally from Elkton FL), crossing gate and signals, lanterns, and hundreds of other items.

The Clay County Historical Society collects, preserves, and promotes the history of Clay County, Florida.  Our collections are donated, loaned, or purchased and held in trust for the use and education of the public.  They are primarily composed of exhibits, photographs, maps, legal documents, and memorabilia of days gone by.

The Mission of the Clay County Historical Society is to preserve the heritage of Clay County, Florida through the collection, preservation, and display of artifacts and historical material by maintaining a museum and conducting activities that promote an awareness of our heritage. 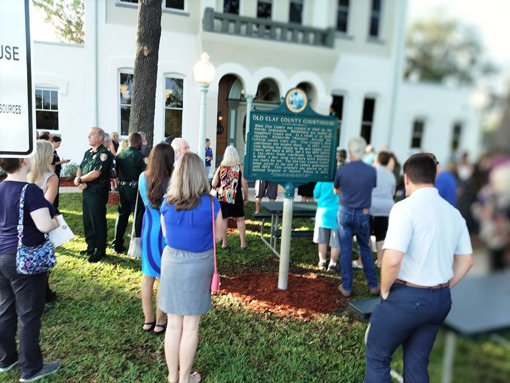 About The Historical Society 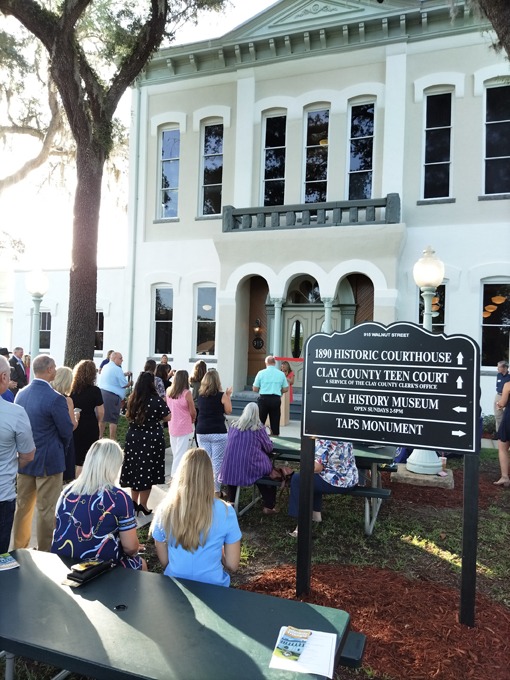 The Clay County Historical Society also appreciates your interest in the other facilities in Clay County. 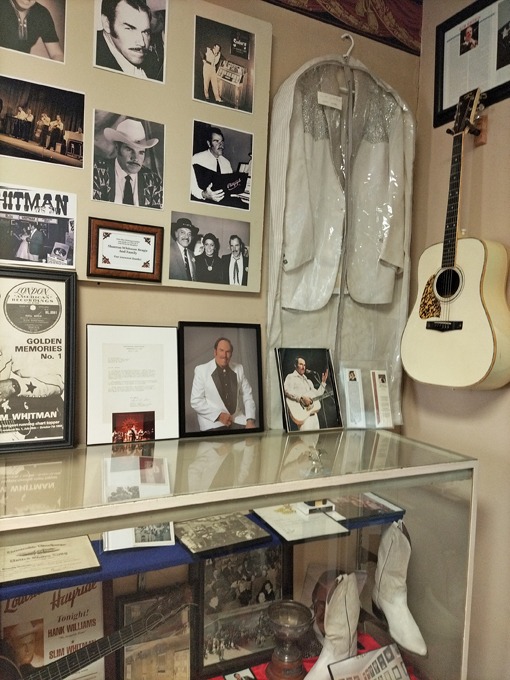 Upcoming events, meetings, and the latest news from the Clay County Historical  Society. 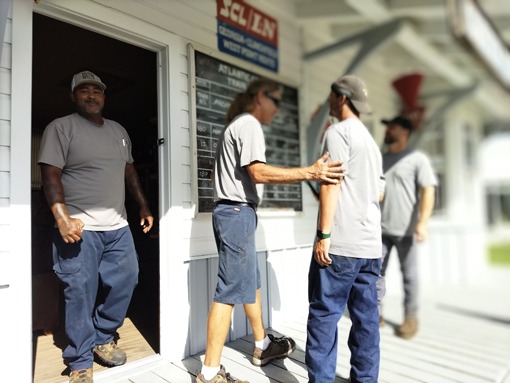 Your support helps us continue to preserve the rich history of Clay County for future generations.  In addition, we hope to provide fun and educational programs to the community. 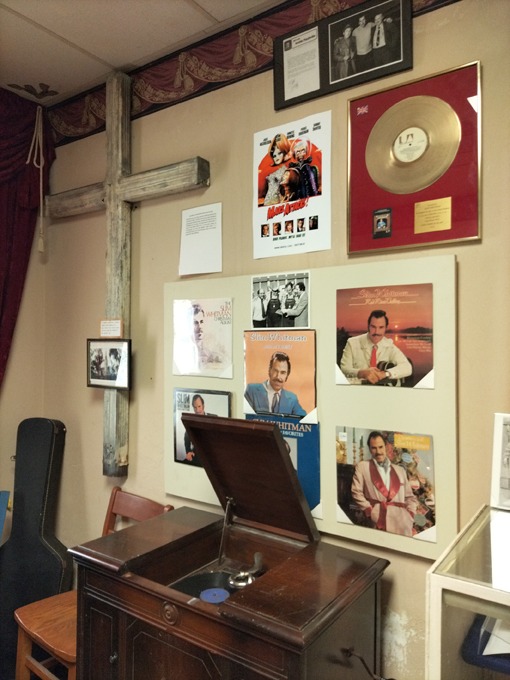 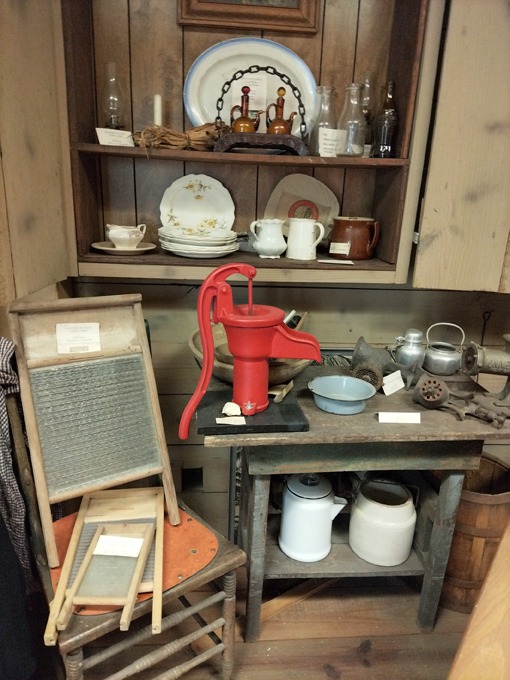 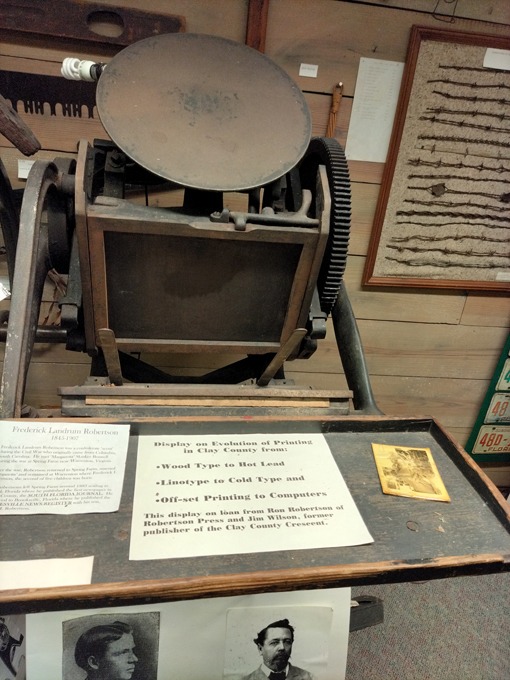 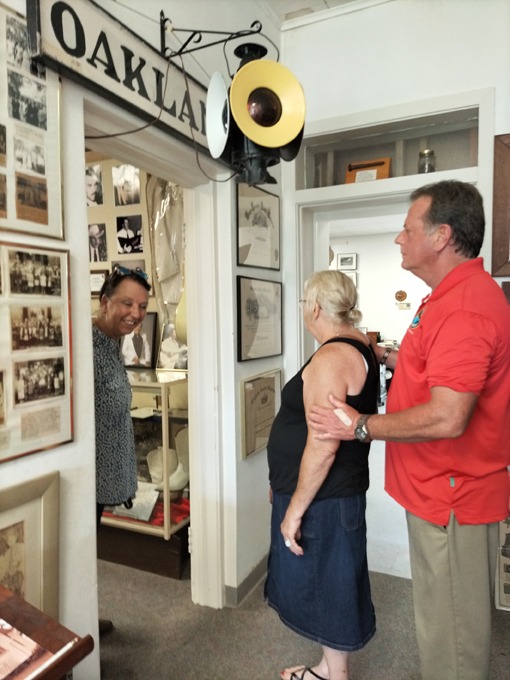 If we can help with any questions please do not hesitate to get in touch!

Please remember that we are staffed by volunteers.

In addition to regular hours please call to schedule tours.

(in the Historic Courthouse Annex) 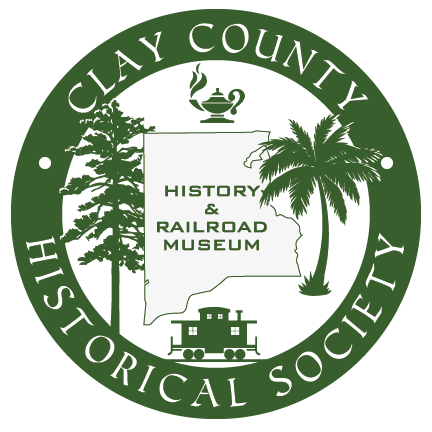